How to Update an Official Version of a Federal Statute Using Only Official Sources: Step by Step

The United States Code (KF62 2012 .A2 – on the 1st floor in the law library) is the official version of the federal statutes. The official U.S. Code is published by the Government Publishing Office (GPO).  It is available on GovInfo.gov in PDF format. Hein Online also has the official U.S. Code in PDF format.  If you are sourcing and validating a federal statute, you must check for the full chronology of updates to your statutory section from the last official edition of the statutes to the current day.  How to update properly and how the official publication process works is explained here.

The official version of the United States Code is updated every six years.  The most recently published complete U.S. Code is the 2012 edition. The 2018 edition of the U.S. Code is in the publication process now.

U.S. Code titles are updated in chronological order and it takes nearly two years to update and publish all 54 titles.  Completed titles of the 2018 edition of the U.S. Code will start to roll out, in chronological order, in late 2019.  Until there is a 2018 version of any U.S. Code title you might be seeking in official form, it will be necessary to check the statutory language in the 2012 edition and its supplements for the updates to each title.  Supplements are available for all 54 titles of the U.S. Code, updated through 1/12/2018.  The website at the Office of Law Revision Counsel is needed to complete the update through all of 2018 and up to the current date in 2019.

The 2012 edition of the official Code has five sets of Supplements, designated by Roman numerals I-V. These five Supplements each contain multiple volumes and were published at intervals beginning in January 2013.

Fortunately, Supplement V has the updates for all Titles 1-54 and covers the period of January 3, 2013 to January 12, 2018, in six volumes.  In other words, Supplement V is cumulative through 1/12/2018 for any statutes that were created, changed, or repealed after the 2012 U.S. Code edition.  All titles and all editions of the official U.S. Code and all the supplements are on the first floor of the law library.  Hein Online has PDFs of each U.S. Code edition and all the official supplements. The supplements in Hein Online appear at the end of the edition of the U.S. Code they update. Open the 2012 edition in Hein Online, scroll past all the U.S. Code Titles, and you will see the supplements.

To confirm the validity, changes, and currency of federal statutory language in the U.S. Code for law review citations, you must update the official 2012 version of the statute (and any published supplements), to the current date using only official sources. Care must be used to make sure you end up with the most up-to-date, officially sourced version of the statutory language you are validating.

To update a section of the U.S. Code to the current date, using only official sources, follow these steps:

1. Start by finding the statutory title and section(s) for your citation in the most recent edition (2012) of the official Code. Carefully read the section(s) and save the 2012 language.

2. Then, check the 2012 supplements. If there have been amendments to your statute since 2012, capture those amendments.  Supplement V is cumulative and has everything up through 1/12/2018.  Keep careful notes as you go.

3. Next, go to United States Code Classification Tables on the U.S.. House of Representatives Office of the Law Revision Counsel website.  The tables are designated by calendar year, and each year's table lists any sections of the U.S. Code that have been amended by public laws in that year. The classification tables are not cumulative beyond the calendar year. Search the table named “Sorted in U.S. Code order” for each year between the last officially updated version of the title/section and the current date.  That will be two years (2018 & 2019), or it may be just 2019, if the 2018 version of your U.S. Code section has been published.

The Law Revision Counsel U.S. Code website is current within a several days, or possibly longer if Congress is in recess.  Check the Currency & Updating tab.

4. If you find an amending public law listed in the table for your code section, you can link to the public law from the table. The number before the hyphen in the P.L. number indicates in which session of Congress the law was passed. (For example, Pub. L. 116-6 is the sixth law passed in the 116th Congress, on 2/15/2019.)  If there is no live link for the public law, you can locate it by its citation on GovInfo.gov, or Congress.gov.

5. Ask your editors, and consult the Bluebook, to decide whether an amended codified section found in a supplement volume should be cited for a statutory change, or, if the public law should be cited. Usually, the public law will be cited as amending the 2012 version, but not always. Supplements are official, and amended language published in them can be cited, giving the statutory section and year of the officially published supplement. You can use the drop-down menu on the Law Revision Counsel website to find the official supplements to the Code, or Hein Online, or the maroon, bound print supplement volumes.

If you are citing a federal statute that has been amended recently and there is no official U.S. Code or Code supplement with the new language yet, cite the public law.  Cite the statute with the year of the most recent official Code, followed with “as amended by,” (insert public law that amended the statute).

NOTE: Sometimes, an author may want to cite the Statutes at Large citation for an amendment, instead of the public law.  This is an editorial decision for your editors.  In the example above, Pub. Law 115-123, a 2018 amendment to the tax code extending tax breaks for diesel fuel, is found at 132 Stat. 149.  You will see the parallel citation to the Statutes at Large at the top of the official PDF of a public law.

You can find the official, full text of public laws in PDF on Congress.gov, GovInfo.gov, and ProQuest Congressional.  Official, PDF versions of all the print volumes of Statutes at Large are available on the first floor of the library, and in Hein Online back to 1789. 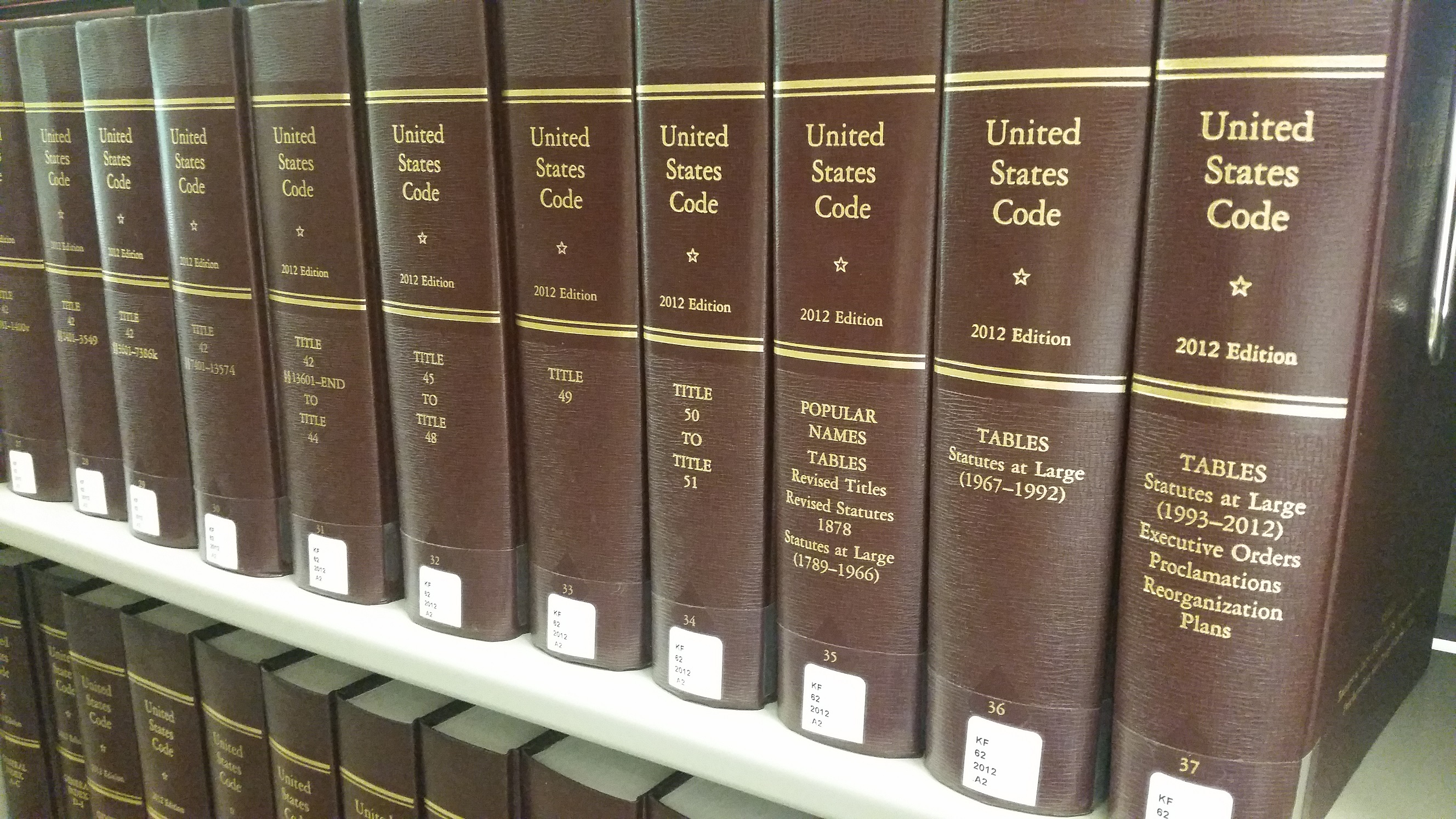 OLRC - The Office of the Law Revision Counsel

The official United States Code is prepared by the Office of the Law Revision Counsel (OLRC) of the United States House of Representatives.

The U.S.Code is a consolidation of federal laws and codification by subject matter of the general and permanent laws of the United States. The OLRC website offers an abundance of information to aid your understanding of the structure of these statutes. In addition to its updating properties, consult the OLRC for an explanation of positive law codification and editorial reclassification, and the difference between these two types of federal statutes.